Weaving looms vary considerably in size and sophistication but the basic principals remain unchanged. A secure frame is required to which the wrap strands are tied. it is either fixed or adjustable.
On adjustable looms, the vertical beams are fixed but one or both of the horizontal beams that hold the warp

strands in place can be moved up or down the frame.
The loom is a crucial factor in the structural quality of the carpet.
The carpets are generally divided into two types: Horizontal looms (flat); Vertical looms (upright). 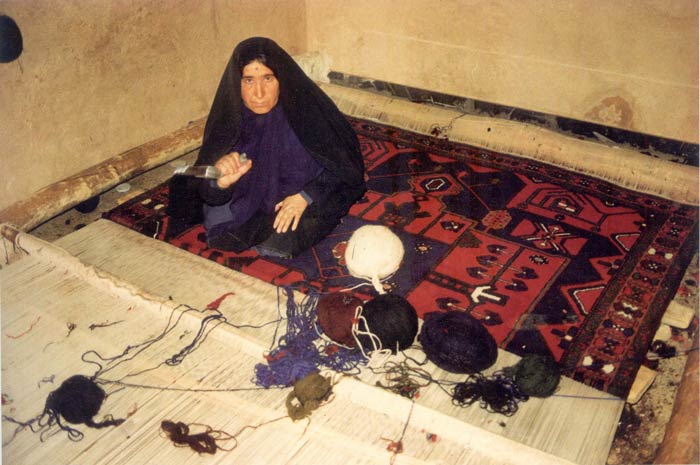 As the name suggest these are used exclusively by nomad weavers. The fact that the loom is horizontal means the weavers have to do much of their weaving from the sides, which becomes very difficult if the rug is too wide. Thus the nomadic rugs tend to be small, narrow and long. Despite the limitation of the nomadic loom. It is perfectly suited to the nomad's way of life, being easy to assemble and take down, and not too large or too heavy to be carries by donkey or mule. 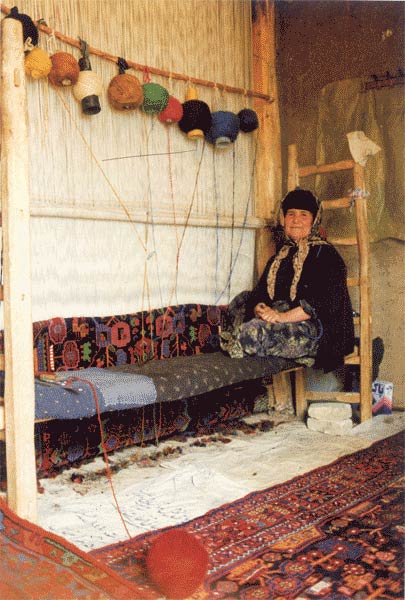 These looms can only be used in cities and villages. The structure of these, to some extent, is more complicated than that of the horizontal ones.
The design and the measurement of the carpets woven on these looms are more precise than those woven on horizontal looms.
The different forms of the vertical looms are as follows: One kind has the shape of a frame and is composed of two wooden horizontal beams joined from both upper and lower sides and two other beams connected vertically which run across the horizontal beams.
The warp is stretched between the two horizontal beams. The village loom, which is rather more upright than horizontal, is almost primitive and resembles the nomad loom a lot. The weaver sits on a plank facing the loom and as the weaving advances, the plank is gradually raised higher.
In this kind of loom, the length of the carpet is usually shorter than the length of the loom.

Read 5830 times
Tweet
More in this category: « THE Carpet Materials Subdivision according to size »
back to top