The Turkoman tribesmen, whose ancestor were the Mongol Turks, years ago, settled between Bojnurd and Gonband-e-Kavus (towns located to the south-east of the Caspian Sea). Some of the tribal weavers of "Tekke", who after the October Revolution, fled from Turkmenistan and took refuge in Iran, continued to weave their famous rugs. Thereafter, they joined the "Atabay" and "Jafarbay" tribes who actually belonged to the "Yamut" group.

As is customary amongst the other tribesmen, the Turkoman carpet producers also weave their single-weft rugs on horizontal looms.
There are three well-known designs woven in this tribe. One is the "Turkoman Ghashoghi' (spoon) design.
The other is the" Turkoman Akhaf'(Bokhara) or Gheze! design as the repeated polygons resemble the deer's eye. The last is the "Chahar-Fasf' (four season) design, produced by the Tekke craftsmen, composed of a small cross in the centre, dividing the rug into four parts. Normally, in the lower and uppers parts and beyond the border of the Turkoman rugs, extra pieces by the name of Shanneh (comb) are woven, which are not utilised in the other carpet weaving centres. 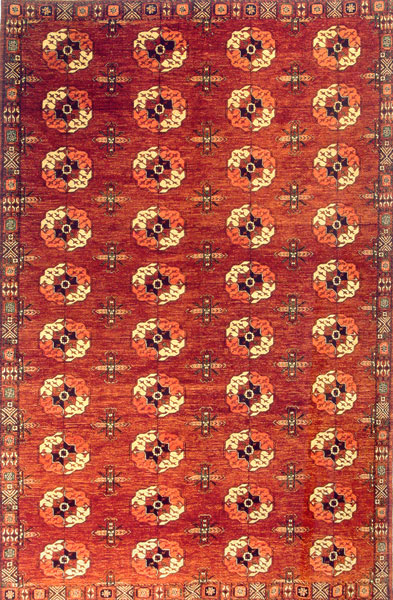 The sizes of Turkoman rugs vary from one metre up to twelve sq. m. The colours widely used are lacquer-red, green, white and beige. Formerly the dyes used for the wool in Turkoman area were obtained from natural sources, but at present chemical dyes have partly begun to come into use.