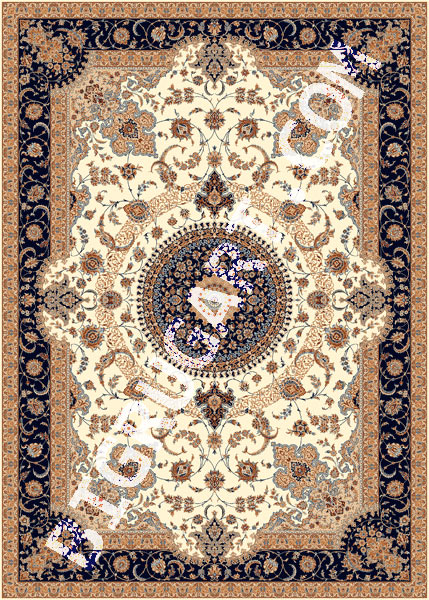 Shah-Abbas the great chose the city of Esfahan as the capital during the Safavid dynasty. He built many magnificent buildings and mosques in the city.
Shah-Abbas, like other rulers of this dynasty patronised Iranian artists and established several court workshops. From that era until modern times, Esfahan has kept its reputation for creating fantastic pieces of art, including fine carpets.
The Second World War caused serious damage to the trade and industry of the market in Estahan and in the world market. During this period, the raw materials used for weaving rugs such as wool and dyestuffs became expensive. In the meantime, some dishonest and profiteering weavers took advantage of this situation and began to cheat and swindle. The fame and trade of Esfahan carpets that was in the forefront of all other carpets in Iran began to decline and the business was at a standstill. Fortunately, at present, the quality of the dyestuffs and fibres used for the carpets in this area has improved.
By re-starting many weaving factories and creating marvellous and fine woven pieces, Esfahan has regained its well-known celebrity.
In the past years and even at present the artists of Esfahan often design their sketches from the diaphoretic and simple glazed tiles of the Chenel-Saturn Building, Naghsh-e¬Jehen, Madreseh Chahar Bagh, Masjed-e- Sheikh Latf-allah and other historical buildings. The patterns mostly used in Esfahan rugs are Shah-Abbasi medallion and corner, Eslimi medallion and corner, trees and animals, overall Shah-Abbas: and geometrical medallion and corner.
Esfahan, was one important centre for the cultivation of various plants used in dyeing. Ronas,(Madder)as well as wild plants containing coloured products can now be found in its mountains and deserts.
At the time, due to their abundance, a lot of natural colours were used in the dyeing centres. At present, however, large quantities of- dyestuffs, particularly chromatic compounds are used for dyeing the fibres of the carpets. The numbers of the dyestuffs in Esfahan carpets are mostly in beige, buff-white, red, dark blue and turquoise. The wool used for weaving is obtained from Kerman, Yazd, Khorasan, Kerrnanshahan and foreign sources. Esfahan carpets are amongst the best of Persian products and are as hard wearing and they are very decorative.
The piles of good quality Esfahan carpets are thick and made of "Kork’’ the foundation are of cotton, the finest ones are woven on silk.
In the small panel of the Iranian flag at bottom or top of the fine rugs of Esfahan, the weaver's signature is woven. There are some other towns and districts in the province of Esfahan where carpet weaving has had a wide circulation.
Isfahan is one of the areas in which the BIG RUG ART has been prevalent during the Safavid dynasty. . And it is concluded that BIG RUG ARTcarpet area of the country with very beautiful designs have been introduced to the world. Big and beautiful carpets woven by the grace of the great museums of the world. 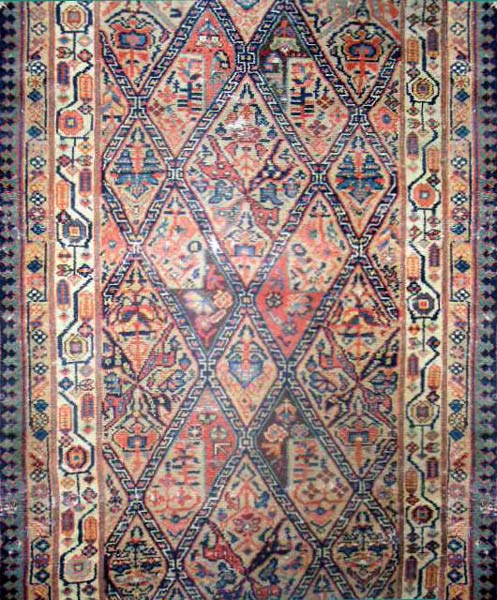 The town of Josheqhan is located a hundred and forty kilometres north of Esfahan. This small city is important in the history of carpet weaving in Iran and has gained fame for its old style weaving, for the interesting designs and the fast and limpid colours.
A wide range of rugs in geometrical designs is made in Josheqhan. The size vary from Sajjadeh to larger pieces.
At present many of these designs are copied and produced in Albania. the quality of Josheqhan rugs is very good. The knot density is high 500 to 2.000 knots per sq. dm. And the fresh and vivid colours are chosen from the best natural dyestuffs.