The fertile and vast province of Azarbaijan is divided into two provinces, i. e., east and west.
Carpet weaving has never been popular in West Azarbaijan. On the contrary, in East Azarbaijan, the development of this industry has always been considerable and worthy of attention. In the last one hundred years, Azarbaijan province has had its outstanding share in contributing to the expansion of the carpet industry. So, when in Istanbul (Turkey) the carpets in stock were insufficient, the merchants of Azarbaijan started to install weaving looms in the different cities of its province and throughout Iran. The result of their initiative was the glory and splendour of this industry in Iran. Both course and fine carpets are woven in Azarbaijan, i.e., they weave all types of carpets (within every seven centimetres one can count eighteen up the seventy knots along the length of the carpets.) in the past years and even recently very fine and good quality carpets have been woven in Tabriz but most of them that are produced in the other cities of the province are generally coarsely-woven.
Normally all the carpets woven in Azarbaijan have Ghiordes knots with double-weft. They are durable and hard wearing.
The colours that are most often used in the dye-houses of Azarbaijan are red, blue, yellow, green, dark orange, beige and other commercial colours, It can be roughly estimated that fifty percent of the colour used in the dyeing centres are provided from natural and herbal sources. For the rest, chemical dyes are used.
The most important weaving centres in Azarbaijan are:
Tabriz 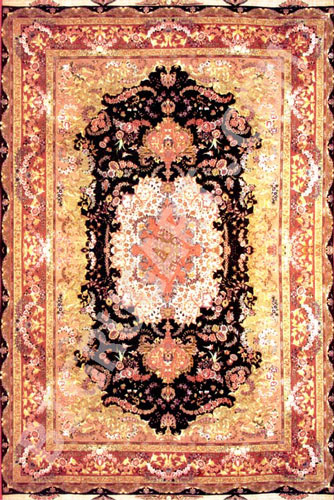 Tabriz, capital of Azaroaijan, has for centuries enjoyed a great reputation as an important weaving centre in Iran. In this city, carpet weaving has had a long record.
During the period of Mongol domination (1221-1449), the city of Tabriz, together with the city of Harat (in ancient Khorasan), was one of the outstanding trade centres where the carpet industry was in its utmost stage of evolution. For many long years, Tabriz carpets, with their interesting designs, durability, fineness, and pleasant colours have always been sought after in Iran and abroad. In the last seventy years the prevailing designs consist of vases with flowers, trees, animals, hunting-scenes, Mehrabi (prayer rugs) with candelabra, branches and leaves with scattered tiny flowers, repeated panels, overall panels, and panoramic. Tabriz carpet weaving exquisite carpets are included. More palaces and large houses that are decorated with impressive decor have BIG RUG ART of Tabriz.
The dimension of Tabriz productions vary from the smallest up to the biggest sizes. Depending on the design and the fineness of the rug, Tabriz craftsmen can tie about eight thousand to twelve thousand knots daily and those who are skilled and professional tie up to fifteen thousand knots a day. In Tabriz, throughout the past years, numerous workshops have been installed and have been active, among which Sadaqhiani, Dilmaghani, Tabatabai, Ernand, Ala-batt, Javan and Mashayekhi can be mentioned. Due to their artistic merit, the production of rugs in these factories were and still are in great demand by local and foreign buyers. Some of these designs have been copied by others weavers in different parts of Iran such as Ghom and Kerman as well as in Pakistan and Rumania. 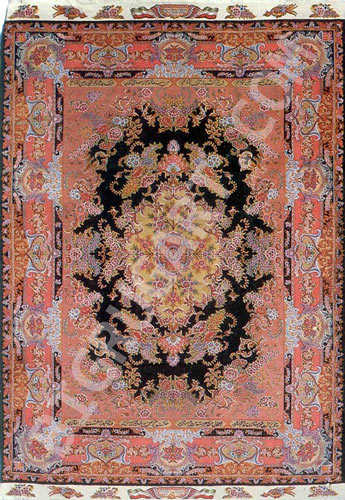 For many years the production of carpets has been very common in Marand. This small town, sixty-eight kilometres north of Tabriz, along with its neighbour Khoy, produce very similar carpets to those woven in Tabriz. It's very difficult to distinguish the difference between them. 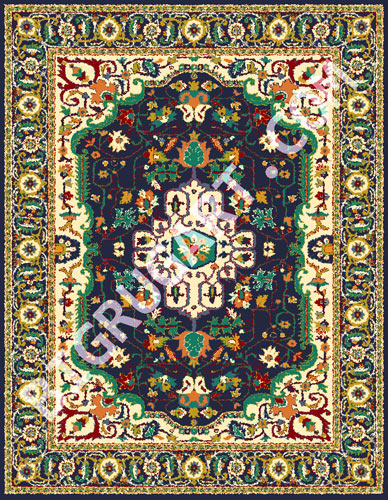 During the Second World War, when carpet weaving in Shirvan and other parts of Caucasia came to a standstill, the Ardabil weavers thought to seize the opportunity and take advantage of the situation. They decided to change and modify their designs to increase their sales.
The runners and the carpets woven in Ardabil are definitely under the influence of Caucasian and Tabriz designs. Recently they have copied the "Herst! design and produced them in various dimensions.
They count from 1 00.000 to 300.000 knots in every square metre. They also use silk fibres to weave fine carpets. The prevalent colours of the Ardabil rugs are turquoise blue, off¬white, blue, beige and sometimes green.

Sarab was one of the leading carpet producing centres in Azarbaijan. Although situated near Heris, carpets from this town greatly resemble those of the more distant Meshkin¬Shahr.
At the present thick and long wearing runners with the background in red and the borders in white and red are woven in Sarab and its surrounding villages. The fields of these runners usually have lozenge and geometrical shaped medallions.
Formerly carpets were woven with camel wool but at present sheep wool is used for this purpose. The lengths of Sarab carpets are normally two to six metres and their width is approximately one metre. 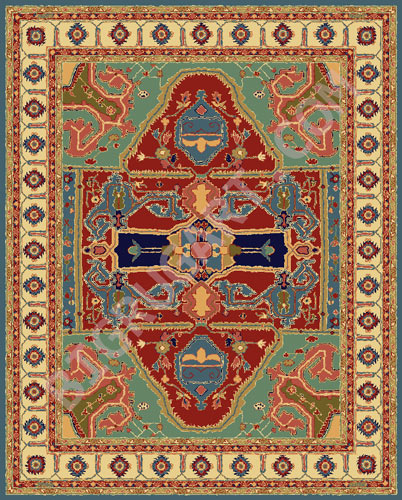 SerebHeris for a long time was well known in Iran and abroad for the long lasting woollen and silk carpets woven in pleasant and agreeable colours. Although the method of weaving these carpets is the same, yet they rarely resemble each other, they are produced in Heris and in thirty nearby villages in medium and big sizes as well as runners. The design of Heris carpets is normally stylised with a very big medallion in the centre that almost covers the field; the corners, too, resemble the centre medallion. The predominant colours are ivory, brownish red, dark and bright pink and blue.
Recently the designs of Heris carpets are copied by Indian and Rumanian weavers, but they are easily distinguished from the original ones as the texture and the colours differ a lot from those woven in Heris. The designs of old Heris carpets differ radically from those of new pieces. Fine wool carpets and Kurk Harris is interested in Europe and in America wants is fine woven silk. 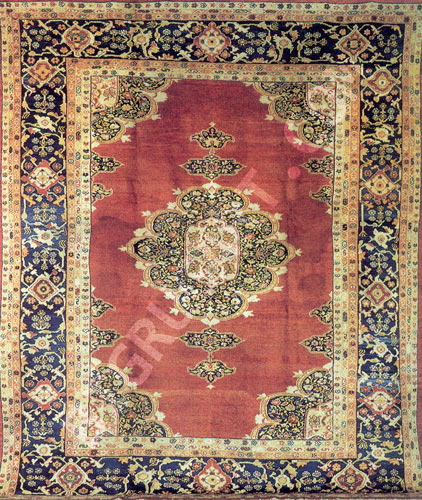 Gharajeh is another carpet weaving centre of which the runners are much demanded both in Iran and abroad. This name is derived from a village that is situated on the western side of Heris. Most of the local weavers produce different sizes of single-weft carpets with geometrical motives on the borders and in among the three medallions woven in the field of the carpets. The colour that they usually apply' is dark red. The network of the warp and weft of the carpet is composed of white cotton thread for the warp and greyish blue for the weft. Other carpet weaving centres of Azarbaijan are Ahar, Meshkin, Bakhshayesh, and Moghan. As a whole, the patterns, colours and method of weaving are almost the same as that of Tabriz.