Nowaday, we encounter the word design everywhere, so much that,everything from an accessory we use in the decoration of our home. Design has infiltrated every aspect of our lives.The characteristics and important factor that have made the carpets of this land world famous are their pleasant, varied and unique design. Each Persian 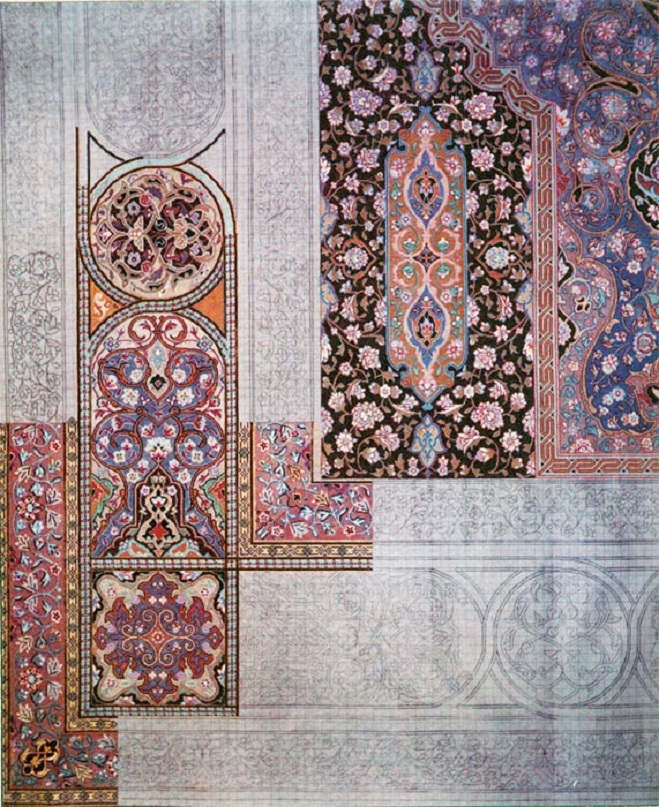 design
Nowaday, we encounter the word design everywhere, so much that,everything from an accessory we use in the decoration of our home. Design has infiltrated every aspect of our lives.The characteristics and important factor that have made the carpets of this land world famous are their pleasant, varied and unique design. Each Persian carpet has a design of its own, so that thousands of fascinating designs can be seen in the whole range of Persian carpets, each being very beautiful and possessing perfect harmony.
When the Persian artist, gifted with very good taste, came into contact with the culture and arts of newsettlers in the country and also with the culture and arts of those who invaded this country, they selected the designs which were most appealing and pleasing and incorporated them in their national designs. Thus, with the presentation of all the designs, the original ones and those introduced later, the artists were able to raise the art of carpet designing to its highest level.
The joint efforts of these designers together with the work of experienced dyers and the silk of artistic and patient weavers eventually resulted in the production of a most beautiful and glorious creation the "Persian Carpet". The durability and unique fineness of Persian rugs and carpets, together with the special quality of the wool used and the brilliant fast colours gave Persian carpets their world wide reputation and placed them on the throne of the carpet art and industry.
Progress towards the perfection of the designs of Persian carpets was gradual. According to historical evidence, the designs prior to the Safavid dynasty were all geometrical. During this period, the art of carpet design, like other fine arts, reached perfection. It must also be stressed that at the same time the motifs portrayed on the tiles of the buildings, the forms' worked on the plaster-mouldings and the designs of the carpets influenced and enriched each other.
The attractive designs of Persian carpets and the harmonious dyes have for many years been accepted by all those interested in carpets. Today, most of the carpet weaving centres in the world, fully aware of this universal acceptance, weave their carpets with Persian designs and do not make much effort to present new designs, as they feel that they cannot improve on the existing ones. The BIG RUG ART company including many carpet designers, graphic designers,and decorator designers that have a new and especial design for your home or your area. In this step we show you classification of the persian carpet on the base of the design that we can be do it .

1-Vase
The pattern of "Vase" was probably created in the second half of the 16th century corresponding with the reign of Shah Abbas. In the pattern the field of the carpet is usually divided from side to side by rows of floral lozenges or some other geometrical frames, arranged In lattice forms.
Each individual design contains a Vase or a bunch of flowers. In the same pattern, either a row of animals or hunters on horse back can be found.
The group of "Vase" rugs is generally subdivided into Arabesque Design, Serrated Leaf, Mehrabi Goldani, repeated 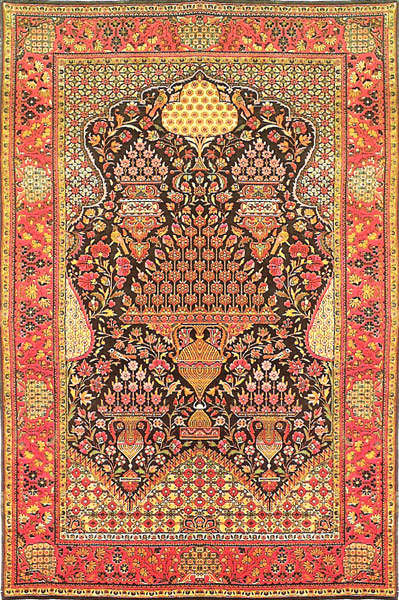 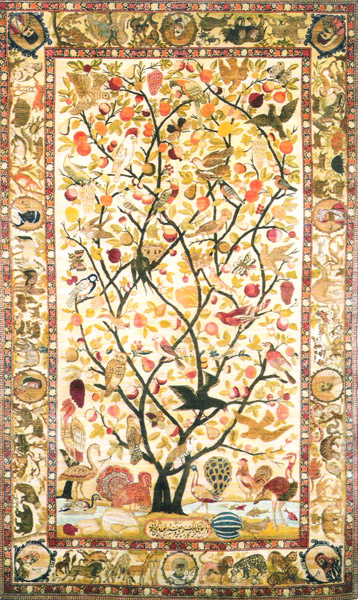 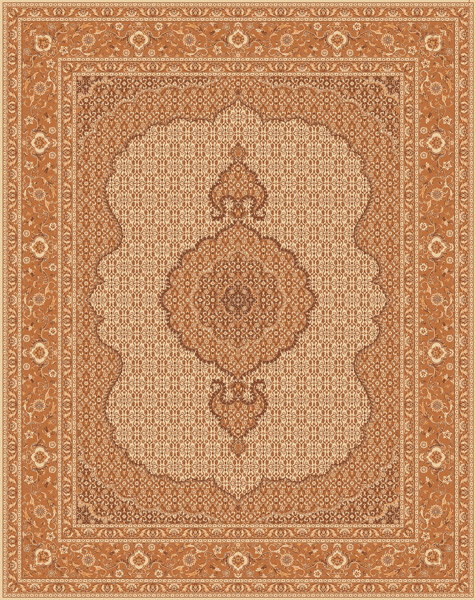 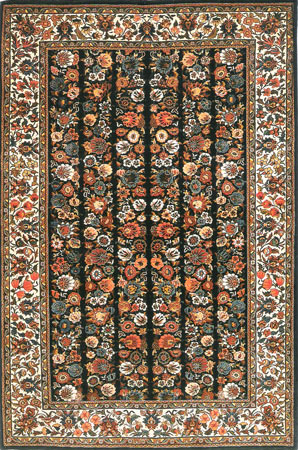 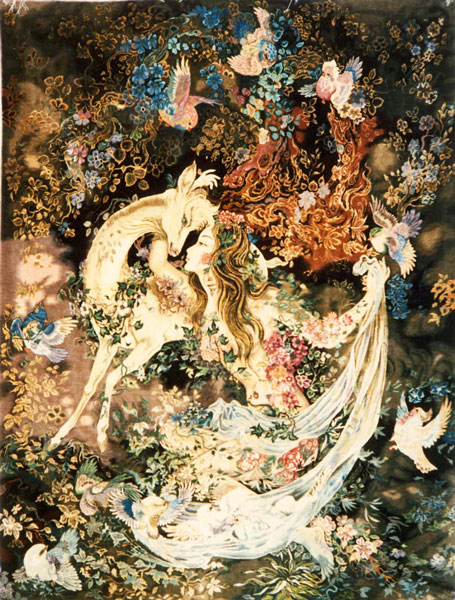 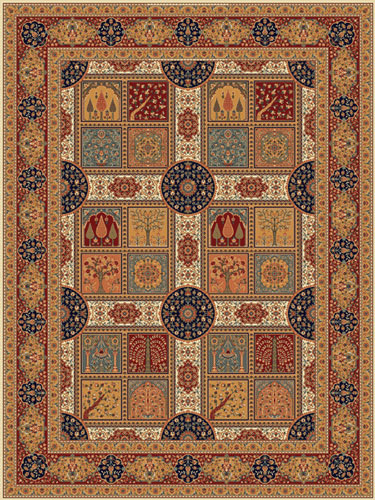 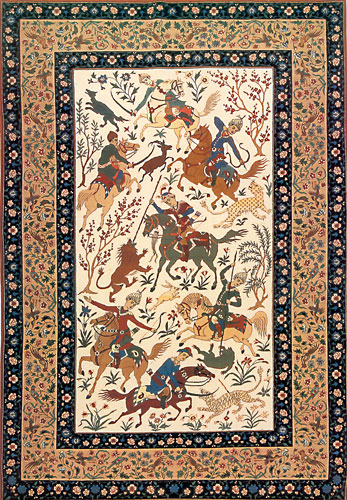 A carpet of this design generally depicts hunting with human figures (usually on horseback) or predatory animals pursuing their prey amidst fertile undergrowth of various plant life.
Formal hunting scenes are firmly rooted in the traditions of the Persian Shahs and Princelings who loved to have themselves depicted as noble hunters and horsemen.
A small number of these carpets are connected to the Safavid period.
Numbering eighteen pieces, fourteen were small in size with dimension of approximately 2.50x1.50 m.
These carpets are also decorated with either Corner Medallions made in silk.
The carpets were woven in Kashan .. The finest of the remaining four larger carpets is kept in the museum in Osterreichisches Vienna, Austria. It is extremely elegant, made entirely of silk and brocaded with silver and gold. The size is 6.80x3.20 m. and its knots number about 1.270.000 to each square metre.
Experts believe that Sultan Mahammad, the skilled painter of Shah Tahmasb's Court, who was a pupil of the celebrated Iranian painter Behzad, designed this incomparable piece. The animals depicted in these designs included lion, deer, wild ass, etc. Pasturing amidst trees and bushes with huntsmen on horseback or on foot, with bow and arrow. 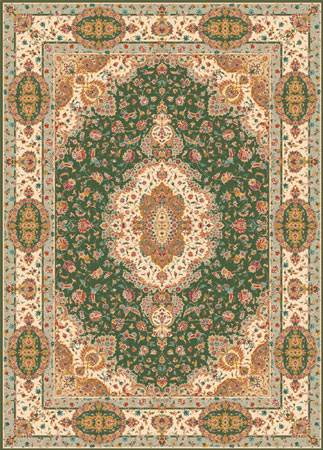 The basic sketch is formed from specially designed flowers, which are known as Shah¬Abbasi. It is set off by other floral designs and occasionally Eslimi motif, these abstract flowers form the main design in the field and the borde-r, all over (Afshan), medallion, Sheikh-Safi, tree, animal, turreted medallion are the better known in the secondary group of this design. 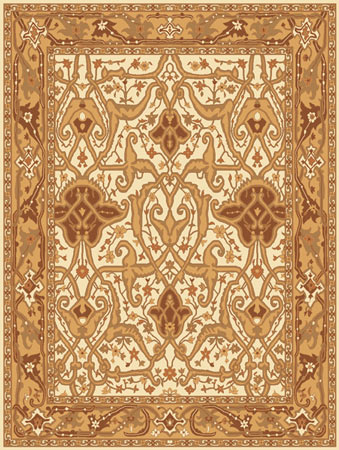 Abstract circular branches of a tree amidst leaves are the basic form of this design.
The branches are adorned with foliate spurs known as Eslimi. There are many kinds of Eslimi designs predominating in some carpets of which the Dahan Ajdari is the best known. 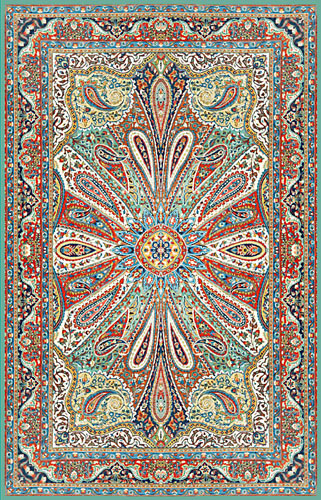 The Botteh design is the abstract form of the cypress tree common in both Indian and Iranian patterns from olden times and for many years it had had a good market. There are various forms and sizes in the Botteh designs in Iran. The famous one of this category are: Botteh jegheh, Botteh terme, Botteh saraband or Botteh Mir, Botteh Ghalarnkar Esfahan, Botteh Kordastani and Botteh Afshar! 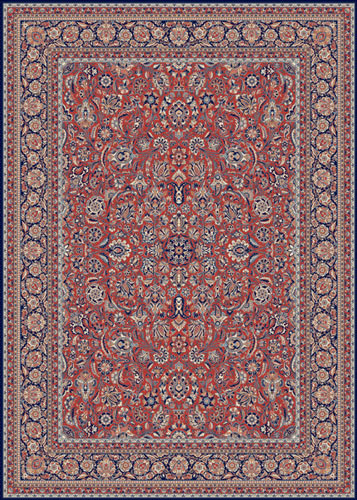 Normally in carpet designs all the components and forms are joined and linked together as if the painter's pen has never ceased its movement from the beginning until the end of the sketch. In the Afshan design, the flowers, branches and other motifs are scattered on the surface of the carpet without being joined.
Well-known patterns in this group are: Afshan Shah Abbasi, Afshan bouquet of flower, Afshan gol 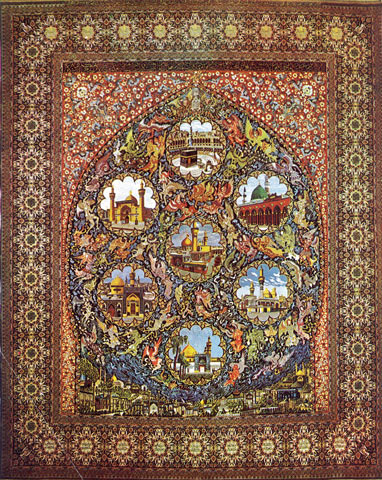 To create these designs the inspiration has been taken from the tile work and architecture of ancient buildings. In the course of history carpet designers have copied the main patterns and created similar designs.
Some of the most famous of the relic are Sheik Lotf-ollah mosque, Takhte-Jamshid
(persepolis), Taqhe-Bostan. 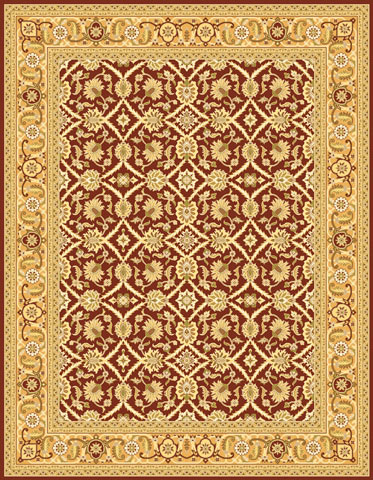 When a small portion of a design is repeated and connected throughout the length and width, the pattern is called interconnected (Bandi).
Sub patterns of this group are known as Bandi Varamin or Mina - Khani, Bandi Eslimi, Bandi Mollah Nasreddin, interconnected cartouche, interconnected deer horn (Bandi Shakh Gavazni). 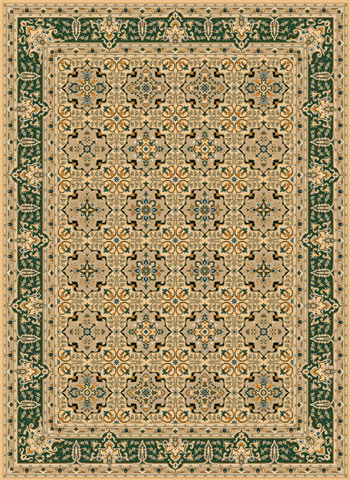 The field of the carpet in this design is divided by some lateral panels and the carpet looks just like a chess-board. The interior of each panel is decorated by the traditional motif of each district such as vase, Botteh, bunch of Grapes, Willow, flowers, birds, animals etc. This design which is originally from Bakhtiari area, is appreciated also by the craftsmen of Tabriz, Ghom, Birjand. Sub - patterns are Bakhtiari panel, Eslimi panel.