Sepanj has started an artistic project recently and go along with it. This project is about paintings, carpets and Freud. As I am saying in this way it seems somehow vague. Therefore, I am going to explain whatever it is. In this project there is an exhibition about carpets which have paintings on them with carpet’s motifs. Also there 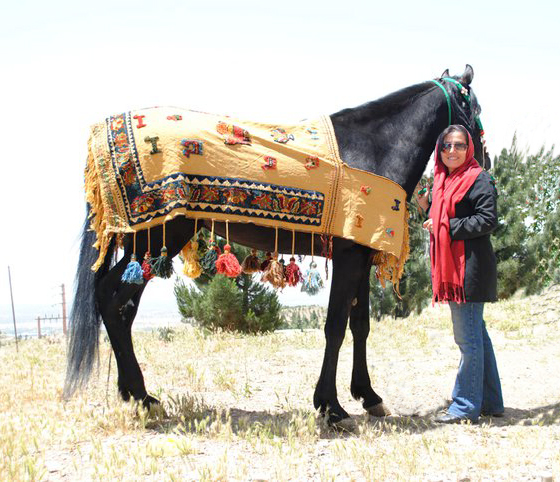 Classification of the Persian carpet

Before \ talking about the variety of the design, it is opportune to mention that all the designs can basically be categorised into three principal groups. All the motifs
and figures which constituted the design are made from composition, contact, rotation and
balance of the lines.
If the lines along their route make angles the design is in geometrical style. But if the lines in their course don't make angles, the design will be classified in the curvilinear group. Should the lines of the design in some part of their route make angles and in others make roundish movements the design belongs to the stylised group. Most Persian carpets are decorated with medallion,(Toranj), and corners.
The medallion is always located in the centre of the Layout and the shape may be round, oval, rhomboid or radial of different sizes which varies according to the taste and custom of the weavers. Instead of a single medallion we may find two or three medallions on the central line of the carpet. Usually on the top and bottom of medallion there are two pendants, (Sartoranj). One fourth of the medallion shape or something of a similar form when repeated in the corners of the field is named corner Lachack. All Persian designs are categorised in two main groups.
Tribal carpets are small in size, woven in a very short period of 3 0 4 months and in the form of a rug and runner.

Twenty-fourth Carpet Exhibition 1394 to be held in September on the first until seven.

The Public Relations Department of Iran's National Carpet Center;It announced the recruitment of graduates to support entrepreneurs in the field of carpet, for people who are engaged in one of the professions associated with carpet production
Good entrepreneurship and employment have launched successful businesses in the exhibition booth carpet Tehran to free transfers.Applicants may be asked to show documents,( Iran's National Carpet Center production) Saadat Abad, lower than the kaj Street kiyan (13), No. 15,   posted or Email This email address is being protected from spambots. You need JavaScript enabled to view it. send.